In late 2019, during what would become, for many people, the last few months of ordinary time as we knew it, a poetic correspondence began between two strangers, via email and the narrow medium of the Messenger pane, and unfolded, one poem at a time. 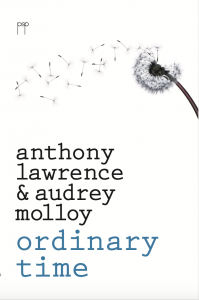 Without so much as the germ of a plan in place, the exchange evolved into an intense collaboration which ultimately became Ordinary Time. Whether courtship dance, blood-brotherhood, or epistolary love affair of the imagination, the reader can decide.

Most extraordinary of all was how this conversation played out in a realm known only to two poets who, at the time of this book going to print, have never met, at least not in the usual definitions of time, space, and light.

Where would you go first, my friend,
when the apparatus glows
with banks of tiny lights
and hums like the Aurora?
Back in time or forward? Novel world or old?

I’d return to where you were
the day I passed, disguised as egret,
loon or puffin,
with the roofing nails
of sand eels looping from my beak.

Ordinary Time will be published by Pitt Street Poetry in August 2022.